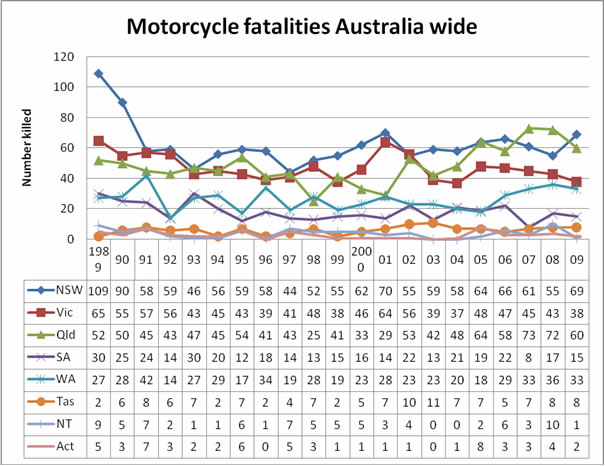 – boring maybe but very important to the policy makers.

There will be a lot of public attention on motorcycles in NSW soon with the upcoming protest ride about CTP and the current Staysafe Committee inquiry.

So here are a few stats to help you discuss the realities of riding your motorbike.

The traditional “temporary Australian” stories are about the road toll.  This first graph and table shows the motorcycle road toll number for all states and territories in Australia from 1989 to 2009.  No rolling averages or smoothing, just raw numbers.

Nothing surprising here.  Even though there are more bikes on the road the numbers are reasonably stable because of:

This next graph shows the NSW motorcycle road toll when indexed against the number of registered motorcycles in the state.  As you can see, even though there are more of us on the road, since 2001 there are more riders doing the right thing and surviving the ride.

All data used has been taken from official federal and state Government websites.

What is Survive the Ride?

Survive the Ride Association of NSW will encourage motorcycle riders to enjoy riding motorcycles, without injury, for as long as they chose.

Key messages:
Take responsibility for your own safety – it doesn’t hurt any less when it’s not your fault.
Scan – Anticipate – Respond to actively avoid situations that lead to a crash.
Wear protective clothing just in case someone makes a mistake.
Speed on the track not on the road – you still get the thrill, it is safer and you keep your licence.